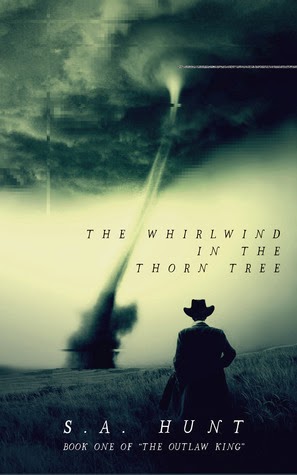 I’m a huge fan of stories where Earthlings inadvertently find themselves stumbling into an alternative world filled with magic, so S.A. Hunt’s The Whirlwind in the Thorn Tree snagged me from the get go.

Ross Brigham was never close to his father, Ed, who was a famous author of a fantasy series possibly as iconic as Robert Jordan’s Wheel of Time or George RR Martin’s A Song of Ice and Fire. While Ross himself was not too shabby himself when it came to stringing words together, I get the impression that he walked in his father’s shadow.

When Ross returns from active military service in the Middle East it’s to make the discovery that his home life, as he’d looked forward to, no longer exists. He might live in his dream home, but his wife has left him. Not only that, but his father has died, and having nothing better to do, Ross attends the funeral of a man he suspects his fans knew better than he ever did. What he wasn’t prepared for was to see the impact his father’s writing had on others’ lives.

Predictably that’s when things start becoming more than just a little bit strange for Ross. The long and short of it is that he agrees to finish writing his father’s so far unfinished series about a world ruled by a mystical gunslinger king. Ross befriends two of his father’s young fans – Noreen and Sawyer – who know a helluva lot more about his father’s writing than he does. Ross is no Christopher Tolkien, that much is for sure.

Where C.S. Lewis had a magical cupboard, Hunt present us first with a magic mirror under a church, followed by an elevator ride into this other world, that sees Ross relying heavily on Noreen and Sawyer’s knowledge of the books as they explore. What follows is an adventure, yes, part murder mystery, but also an examination of the creative process.

Hunt doesn’t cover any new ground with this book. That being said, he does take one of my favourite tropes – that of an Earthling transported to another world – and puts his own stamp on it. And, let me tell you, Hunt’s imagination is a wonderful, strange place to be. If you’re looking for elves, orcs and dragons, then you had best go elsewhere for your jollies. This novel recalls everything that I love about westerns, but it’s also in part a surreal homage to The Neverending Story, for all the metaphysical reasons encapsulated in Michael Ende’s work. But this is all fantasy – The Whirlwind in the Thorn Tree leaves me feeling that I’ve dipped into a curious melange that is unlike anything I’ve read recently.

If you can push aside your expectations and just hold on for the ride, you will be transported to some of the most well-realised and utterly strange settings you’ve seen in a while.

Yes, the pacing is a little uneven in places, but oh my, Hunt really understands how to evoke a sense of place, wonder and mood, even at his most surreal moments that I could overlook any rough edges (there weren’t many).

I kept thinking a little about Stephen King’s Dark Tower series while reading – maybe the whole mystical gunslinger vibe – but overall I just loved every moment of this book and I’m keen to go on to book two. Watch out for this author. His imagination has run wild and it’s abso-bloody-lutely awesome.

Posted by nerinedorman at 1:16 PM