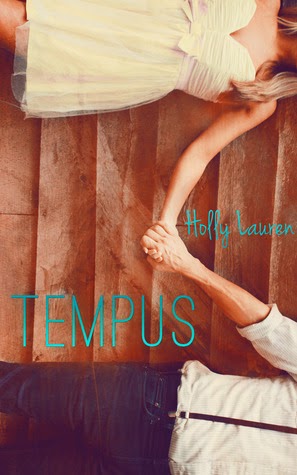 From the get go Tempus by Holly Lauren looks and feels like countless American high school-set YA, with prerequisite love triangle, cheerleaders and football jocks. And you can be forgiven for assuming that, because for the first half of the book that’s pretty much all there is. Except that the protagonist, Chapel Ryan, occasionally suffers what she terms as “hallucinations”. For all that Chapel is your average cheerleader type, with a prerequisite loyal tight-knit group of quirky friends, she literally stops time occasionally, and has little control over these episodes.

Consequently, she thinks she’s a freak and she goes to great pains to be as normal as possible. Her home life might look ideal from the outside, but tensions abound. Her stepfather is an upwardly mobile politician and Chapel’s mum, Valerie, is focused on raising Chapel’s young twin half-sisters. So Chapel can be excused for feeling a bit isolated on the home front, especially since she is still struggling to come to terms with the fact that her biological father died when she was only three. And she so doesn’t like her stepfather. He’s uber creepy as all hell and I don’t blame her for giving him the cold shoulder despite his generally amiable advances.

One of the main accusations I often level at YA fiction is that the main character is primarily boy-obsessed. Not so in Tempus. Chapel is a well-rounded character. She worries about what her future holds beyond sole interest in the opposite gender. She takes charge of her life as much as she can while still technically a minor. She genuinely cares about her friends. She’s a hard worker who’s not afraid to stick to her guns. Chapel tries to do the right thing and applies common sense when solving problems. (Oh, guess what? She’s not clumsy! You have absolutely no idea how refreshing this is.)

Yes, it can be argued that Chapel’s a bit squeaky clean (hello, she’s a Sunday school teacher, it don’t get squeakier than that) but at no point did she make me want to gouge out my eyes.

A word on the love interest: Isaiah is the dark, dark, edgy and unsuitable boy with a dodgy past. He also lives next door to Chapel (but it’s not so much of a coincidence as you’d think). His stalkerish behaviour, however, does creep me out a bit, so I wasn’t entire comfortable with their relationship. Okay, he wasn’t as bad as Edward Cullen, but he was pretty bad.

The reasons, for his behaviour do become clear later on yet still, yeah, I’d be less than thrilled if my love interest pulled a few of the stunts Isaiah does right in the beginning when they’re first getting to know one another.

Let me add that Lauren is pretty good at misdirection. There were a few outcomes in the story that I expected, especially with regard to the love triangle trope that she successfully uses as red herrings. And I think those little bits of misdirection definitely contributed to my enjoyment of the story.

The underlying premise of Tempus relates to the concept of genetic mutations that allow people to perform an assortment of supernatural feats. Over the years, these people have formed secret societies and they’re not playing nicely with each other. With her rare ability to stop time, Chapel finds herself in the midst of a tug-of-war for her loyalty. She doesn’t have all the details and for her it’s a race to uncover the truth about herself, her father’s death and stay a step ahead of a dangerous enemy.

Lauren throws in a few sneaky twists and turns, so not everything is as one would expect. World building is generous and offers a lot of scope for development of the story.

Of course no review would be complete unless I shared a few of my niggles. While overall pacing is tight, and only a few typos grabbed me by the eyeballs (mostly homophone abuse) there are some moments when the writing goes too fast and I had to reread passages a few times to gain the gist of what was going on.

That being said, these moments didn’t make me want to chuck my phablet across the train carriage because Lauren settled those speed wobbles quickly.

Tempus makes me think a lot about the X-men and in that respect should appeal to superhero fans. Would I read book two – definitely. Lauren delivers a solid, action-packed YA tale that’s tight, features well-defined characters and has a lot of potential for an ongoing series.

Posted by nerinedorman at 12:14 PM