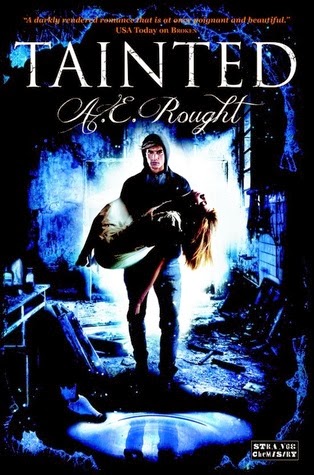 Our classics are a great source for inspiration, and AE Rought has paid homage to Mary Shelley’s Frankenstein in her Broken series. Though I didn’t get to read book #1, Broken, I didn’t feel at all lost in the story. The premise is clear: Alex Franks died, but his scientist father brought him back to life, but at a cost – the deaths of other young men. Now another’s heart beats in his chest, and Alex finds himself infatuated with the late Daniel’s girlfriend, Emma Gentry. Fortunately for Alex, Emma returns that love, and the two are so happily in love it’s positively gooey. But in a good way.

Of course if things were to remain that rosy, then there wouldn’t be much of a story, and there are plenty of complications our hero must face. He might have been offered a second chance at life, but he’s still tied to Ascension Laboratories, where dubious medical practices exists cheek by jowl with life-saving research.

Alex needs Ascension in order to maintain his unnatural existence. Unfortunately this entangles him with Hailey Westmore, who is a rather svelte, Evil Ex-Girlfriend of the highest order whose existence is integral to Ascension. She’s so deliciously wicked, and as the story unfolds, she’s so clearly at the heart of his problems but we just can’t pinpoint how – and she can’t just go away either.

Alex can’t find a convenient solution to this problem. He might be his father’s heir – a privileged young man – but he’s still just a teenager, who’s busy finishing his education, and is faced with all the other frustrations of not being a hundred percent in control of his life. Which tells, when the proverbial large, overripe fruit hits the fan – as it does. The plot curdles, and Alex’s frustrations increase. Things are happening in his life, and he’s at that awkward stage where well-meaning adults are still trying to take care of him – which to a degree paralyses him from solving his problems. When he does act, the results have far-reaching, unintended and tragic consequences.

Rought is a mistress of the Gothic novel who has imbued this literary style with her passion for a darn good love story that transcends the boundaries of death. If you’re looking for a contemporary paranormal tale that’s going to press all the right buttons, then add this one to your reading pile. Tragedy, madness, true love – what more could a reader ask for?
Posted by nerinedorman at 12:12 PM