Every once in a while there’s a novel that I put out that’s what I term a “heart” novel, and Dawn’s Bright Talons is one of them. And let me tell you this one has been a journey of years – so much so that I no longer have a clear idea of what sparked the novel off. 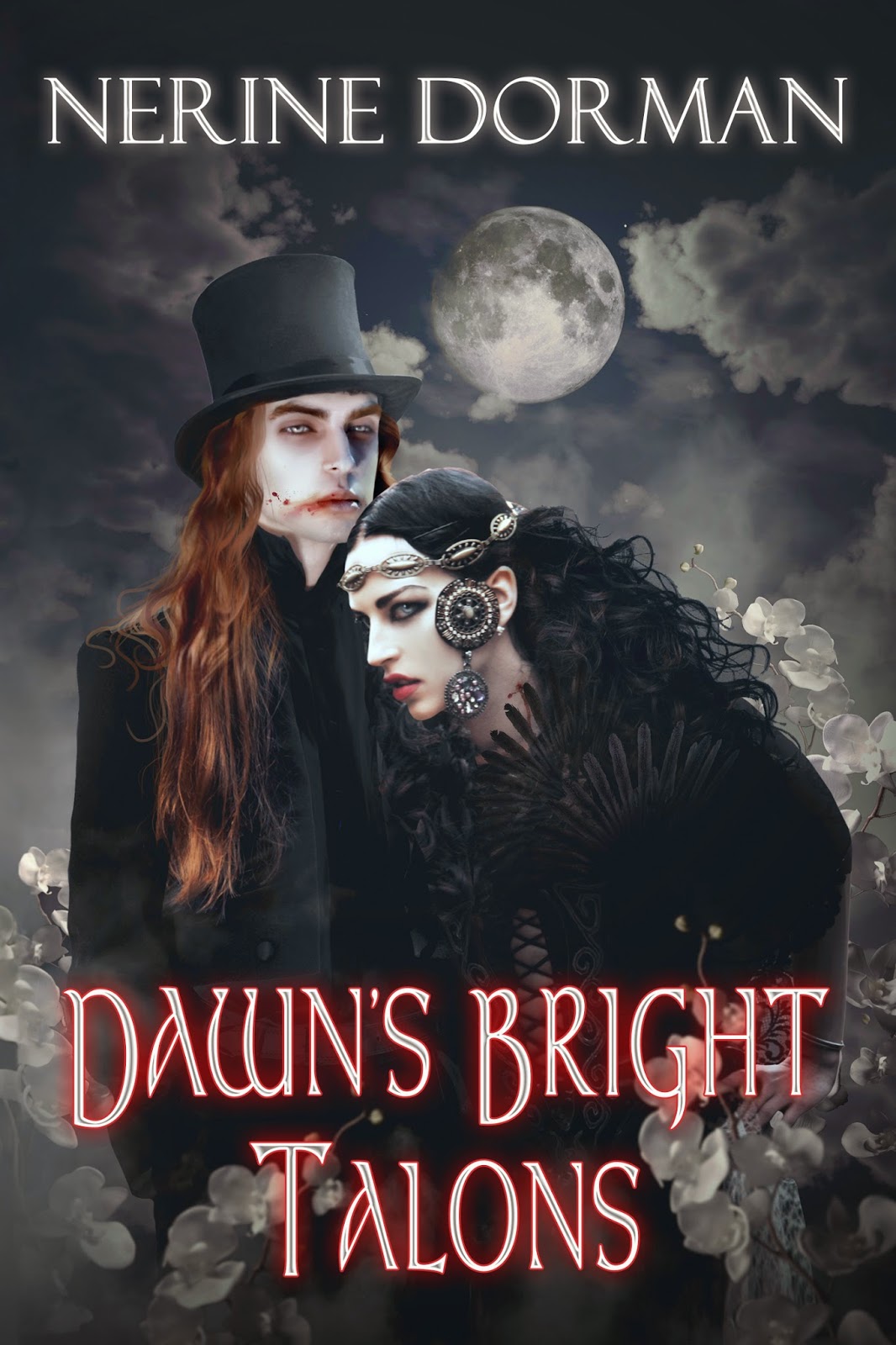 I must add, that this is the first secondary-world epic fantasy that has seen the light of day (we won’t discuss the ones that didn’t quite make the cut, okay?). If I dig deep enough, I will admit to borrowing a little from an older, mothballed work entitled The Black Goat (it’s the name of a ship, my dearly beloveds, and the novel was about vampire pirates and ironclads and there’s a verrrrrry good reason why it never saw publication).

My characters came to me quite clearly. Isabeau is young, and still enamoured with the idea that she’s immortal (don’t we all feel like that when we’re sixteen?). She’s a dancer at an upmarket club in the city of Ysul, and she’s determined not to become a courtesan like her late mother. But she’s not doing a particularly good job raising her younger brother, as he’s running around with the wrong sort in town. Not only that, but she has no idea that she’s the heir of an ancient lineage of hereditary dhampir – a quirk of genetics thanks to her parents (who probably should never have enjoyed their dalliance). The only problem is that she may not live long enough to come into her full powers, because her natural prey – vampires – will do everything in their power to stop her from becoming a threat to their existence.

Oh, and the city of Ysul is riddled with vampires. They lurk in the shadows like malignant spiders tugging at their webs and ensnaring the unsuspecting into doing their bidding. They’ve done a lot of convincing to ensure their so-called mythological status, so anything that will upset their cosmic apple cart, so to speak, needs to be dealt with. Only none of them expected Isabeau to drop into their game. The mere fact that she even exists, is a rather unpleasant surprise for them. In the wrong hands she could be a powerful weapon. Left unchecked, she could spell the end to their machinations.

You'll also get to know Michel. He’s a young vampire who had his fill of all the political intrigue, and he’s done the unthinkable – he walked out, and refuses to have anything to do with his kind. Unfortunately for him, this has placed him in a vulnerable position, because all fledglings require a patron. When his erstwhile patron goes missing, an elder reels in those shadowy threads, and Michel is drawn back to dealing with his kind when he'd rather be running his theatre.

Of course there is no such thing as instalove for my unhappy couple. By all rights Isabeau might find Michel a tasty, energising snack, and Michel has to tread carefully, because his loyalties are about to be severely tested.


“It’s best you attend at your earliest convenience, milord,” the young man said. He bowed at the waist, in the manner of the Delrochian families, his arms crossed over his chest. To the eye, he was unremarkable: drab hair neither blond nor brown, and a sallow complexion that spoke of mixed heritage. Ezekiel chose all his minions with care, but to what end with this one?
I stared impassively at the servant, who looked up at me with hopeful brown eyes. He was still new to this game. “Very well. Tell the lord I’ll attend at my earliest convenience.” I spoke the last two words with a sneer. Yes, it rankled that my grandsire saw fit to summon me thus, using a new lackey, no less.
He remained rooted to the spot. I smelled the sourness of his tension, the way the sweat dampened his armpits. Tiny beads of moisture collected on his upper lip and his eyes darted from side to side, as though he checked for hidden dangers. Who was I to let him think otherwise? Unlike the other vampire lords, I did not live cosseted by dozens of servants and men-at-arms. It was just me in this empty Willowbrook residence, the windows on all three floors firmly shuttered tightly against any light that might hope to intrude.
“I have a carriage, milord.” He gestured to a small cabriolet that had been drawn down the side street, half obscured by one of the large magnolias. The distinctive crescent symbol of my grandsire’s bloodline stood in clear relief: silver against black lacquer. The horse, a rangy bay, snorted, as though it was aware attention had shifted to it.
Slowly I turned back to regard the youth. His hair had been cropped close to his head not too long ago—a recently freed slave then. He must have a brand somewhere on his body. What motivated Ezekiel to have one such as this in his employ? The servant shuffled his feet, and I could only imagine how he must perceive me—a cold, dead thing like his lord, studied in my movements and almost reptilian. I might strike in a flash, and make good on the eternal threat of violence I held onto.
“Please inform your master I shall find my own way to his estate. I have matters I must attend to before it is convenient for me to address his whims.” Though I wanted to laugh at the youngster, who wasn’t much older than I’d been when I’d been turned, I didn’t. Instead I inclined my head ever so slightly, stepped back and shut the door with a quiet snick. Only then did I take heed of the fact that my hands trembled terribly.


Liked this? Feel free to feed your readers at Amazon.com, Amazon.co.uk, Kobo, Nook and Smashwords. But, of course, if you're venturesome, three lucky readers who sign up for my newsletter will each receive an ecopy of Dawn’s Bright Talons.
Posted by nerinedorman at 1:10 PM