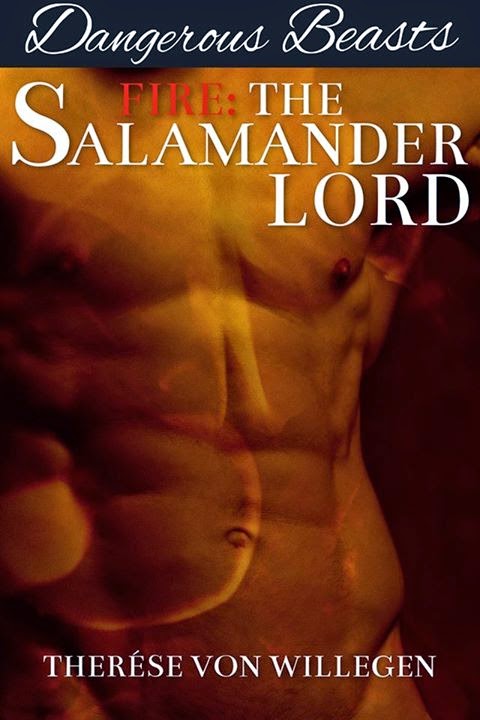 So, that’s how Therése von Willegen came into being: basically Nerine’s stories with a whole pile of additional *schmexxors* as we like to call it among my fellow authors. You’ll still find all the usual elements, but let’s just say that things will be … erm …  a wee bit more frisky. Or, as one friend described my latest, “Wow, Nerine, this is quite saucy.”

For those of you who like this sort of thing, I already have two novel-length works available. One is Tainted Love that I published a while ago. It’s a bit of a reverse-Cinderella story, about the good girl who discovers her innate, natural flair for exotic dancing after she gets retrenched. Then there’s Hell’s Music, which ties into the Books of Khepera universe, although my notorious Jamie only gets a brief appearance as a secondary character. Both have their feet firmly planted in contemporary culture.

Which is why I’ve decided to start dipping my toe into writing fantasy erotica, and releasing these in bite-sized pieces, which seems to favour the current climate of mobile reading. The first of these is my tale The Salamander Lord, which is themed according to the element of fire. (Yes, there are more to follow.)

Everything the witch Enya holds dear is threatened by the advance of the Golden Empire. In order to find the power to better her magical skills and help save her sisterhood, she’s sent on an impossible mission to capture an elemental. Not just any elemental, but a creature born of fire—a salamander lord. Only Enya doesn’t expect her passions to be ignited in the ruins of Castle Mondragon. Nor is she prepared for the immense power her fascination with fire unleashes.


To whet your appetite, here’s a little teaser…
She hissed against his lips and dug her nails into the satin-slick skin above his hipbones. The man pulled back, his smile a wicked slash as he regarded her.

“What do you want to offer, little witch? My price is to hear you moan and sob. I want to pin you to this couch and sink myself so deep within you that you’ll be split in twain with lust. I will take my fill of you. Or...”

“Or?” she all but whimpered.

His eyes gleamed. “Or you return to your sisters. Alive. Unharmed. And I will give you this.” He sat back on his haunches and held out his right hand palm up. A tiny flame fluttered into life and shivered before winking out.

“Wait,” Enya said, confused. “You just saved me after making me promise to pay a price and now you’ll let me go with fire...”

“You choose. You can have fire. Any fool can hold a flame but can you truly say you know fire?”

Like that? Well, feel free to purchase a copy at Smashwords, Nook or Kindle for only 99c. Alternatively, three lucky readers who sign up for my newsletter here, will each receive a free ecopy of The Salamander Lord.
Posted by nerinedorman at 12:35 PM