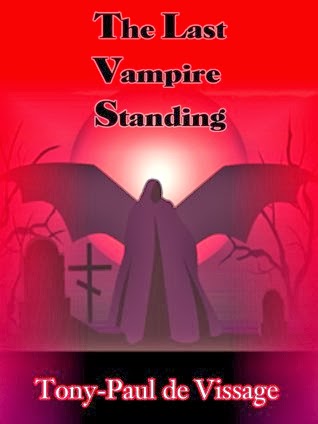 Lovers of action-packed paranormal fiction that involves the perennial favourites – vampires – with a side order of werewolf, will find plenty of what they love in Tony-Paul de Vissage’s The Last Vampire Standing.

Vampire Vlad has an axe to grind. A few centuries ago, he rebelled against his maker – to great disaster. In retaliation, Rigla had him buried undead, and there the matter would have rested if it weren’t for Vlad’s loyal thrall Marius.

Fast forward to 2012. Vlad is hell bent on revenge now that he is fully recovered from his ordeal, and he discovers that his immortal enemy now resides in Savannah, Georgia. Vlad wastes no time travelling to the New World so that he can face his enemy.

Of course no woman is safe from Vlad’s predatory nature, and he wastes no time with the ladies the moment he arrives at his destination. Of course it is love at first sight when he meets Meredith. Fortunately for Vlad, she’s already clued in on the existence of supernaturals thanks to the fact that her sister has been turned into a vampire a while ago. In addition, she’s besties with the unlikely pair of friends – Sebastian, the vampire, and Dusty, the werewolf .

This prepares the ground for what follows: essentially two story arcs – Vlad planning his coup and Vlad and Meredith’s romance.

Vlad as a character made me cringe at times, mainly because he is unaware of his own social awkwardness. He is so accustomed to being obeyed and getting exactly what he wants and when he wants it, that he doesn’t always think through the possible consequences of his actions. Yet at the same time, he’s such an endearing bastard that you can’t help but feel affection for him.

There are times when Vlad’s modern mannerisms seem at odds with his age and cultural background, but as a whole he’s a fun character to get to know. IF you’re in the mood for an oversexed vampire with a somewhat tongue-in-cheek sense of humour, then you’re probably going to get on just fine with Vlad.

Meredith’s a bit of a goody two shoes – a sensible girl whose being too level-headed means she’s not done anything reckless until she meets Vlad. I didn’t feel too strongly about her either way, but I did want to slap her for letting Vlad get off so easy. And, likewise, I felt the other supernaturals allowed Vlad to take charge way too easily. I’d expected a little more reluctance – after all, he is a newcomer. But, who knows, maybe it’s because he’s so damned charming no one can refuse him.

There were a few issues that I had with this book that I feel I need to mention – for the sake of offering an honest, balanced review. Throughout this novel, I felt the pacing was a fraction off. There are the two main story arcs as mentioned earlier, and I feel that there is not enough focus on the conflict between Vlad and Rigla. That being said, this is dealt with briefly at the start and the conclusion. The romance element smack bang in the centre of the planned coup robs it of much of its tension and sense of danger – I personally would have loved to see more build-up in conflict between Rigla and Vlad, and more of a heightened sense of danger. As it stands, the focus is diffused between the two.

There were a few wobbly moments with typos that crept through, so perhaps if there is a chance for the editor to give this another once-over at some point in the future, it might not be a bad thing.

That being said, it’s clear that when we’re dealing with De Vissage, we’re in the capable hands of a storyteller who enjoys his art very much – and it shows. His enthusiasm and attention to detail when it comes to setting and characters provides great entertainment. So often there is something lacking in many other paranormal tales – a sense of playfulness, especially when it comes to dialogue and characterisation – which De Vissage brings across in abundance.

Overall this is a fun, supernatural romp where vampires pack plenty of bite, and I suspect there are enough loose threads left on purpose at the end which suggest De Vissage may have a book two up his sleeve.
Posted by nerinedorman at 3:01 PM