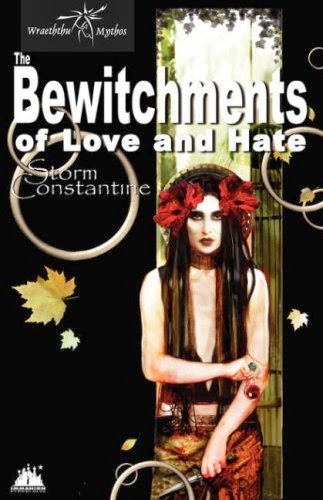 In book two we break with Pell and Cal, and instead return to the alluringly named Forever – the home of the Varr Terzian. This time we grow alongside his son, Swift, whom we encountered briefly as a harling in book one.

As a pure born (both his parents were Wraeththu) Swift has many advantages over humans and indeed the Wraeththu who started out as humans. He experiences accelerated growth (coming of age within seven years as opposed to sixteen) and a precocious intelligence and aptitude for learning.

To Swift there is nothing wrong with the Varr tribe, at least not at first. They are all that he knows, and it is the Gelaming, that his father is away fighting, that fill him with a sense of concern. The Gelaming threat hovers constantly on his horizon, but doesn’t at first intrude.

Mysterious Cobweb is more fully revealed as a well-rounded character – prone to outbursts but in possession of great insight into the hearts and minds of others.

Swift partakes of both his parents’ qualities, though in him, Terzian’s aggression is somewhat tempered to assertiveness. He is curious and capable of great compassion. What is also apparent of Swift is that he seeks a middle ground, and as such as an almost uncanny ability to patch up disputes – all admirable qualities of a potentially great leader.

There is, throughout this novel, the troublesome Cal, who continues to haunt the lives of those with whom he’s tangled. Sometimes he’s torn gaping wounds – as in the case of Seel. For others he’s been an obsession, for instances Terzian. Wherever Cal goes, he captures hearts, but he has his own demons to face, and his time with Swift offers him that opportunity to come to terms with his past. The process hardly pleasant, and has plenty of fallout.

Some comment of the ending is, I feel, necessary. I expected Constantine to make the conflict between Varr and Gelaming the centre point of the climax, but it isn’t. Resolution of the external conflict is almost bloodless, effortless, in my opinion, and if you’re looking for an action-packed final battle, you’re not going to find it here. Rather, the conflict is subtler, the battleground the hearts of hara and the shifting allegiances between characters. This is where the meat and bones of this saga lie.

Of course I immediately went out and bought the next in the series. I love this epic that much. Constantine hits the mark, as always, with gloriously textured, carefully nuanced tales that slowly unfold like a sumptuous feast.

Posted by nerinedorman at 1:33 PM