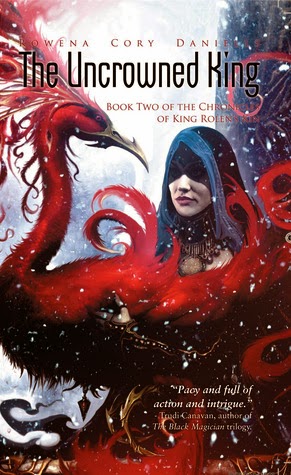 I was less than impressed by book #1, The King's Bastard, for various reasons, yet I found the setting and the characters compelling enough for me to sally forth and purchase book #2. I'm happy to report that the writing shows a marked improvement though, from time to time, Daniells does slip up with characters' motivations, and my horrid little editor's eye even picked up some typographical gremlins.

I will, however, state that the characters have totally stolen my heart. Byren is my firm favourite – he's kinda goofy in that he means well and I get the idea that he's not the sharpest tool in the shed. However, he does have a keen sense of fairness in his dealings with others, even if his buddy Orrade's being gay and boy-crushing on him makes him really uncomfortable. Also, he's got his hands full with a rebellion he wasn't even sure he was leading at first. Oh and there's his dealings with that pesky ulfr pack that's a nice twist hinting at further developments.

Piro only just escapes getting herself killed when the evil overlord Palatyne conquers Rolenhold. Her previous experience acting is the only thing standing between her and certain death. Yet, she's out of the frying pan and into the fire when she finds herself captured by a renegade power worker and dumped in the thick of courtly intrigue. The somewhat naive and immature princess needs her wits about her if she wants to remain alive. On top of that, she needs to learn how to use her Affinity gift, and fast.

Fyn finds himself taking an unasked for leadership position when a great evil befalls his beloved monks, but soon he strikes out on a daunting quest. He's a bit too trusting of those he falls in with, which naturally lands him deeper waters. He's a fun character, and his story arc is fascinating to behold. He might not have his older brother's brawn, or manner with the ladies, but out of all the siblings, he's definitely got the smarts.

The premise of this trilogy is simple: three royal siblings are cut adrift from tall sense of security. Each has preconceived notions of what their futures held dashed, and must now find a way forward in a world turned hostile. A major selling point for me was the unconventional magical critters that run amok in the milieu – amfina, cockatric, ulfr, leogryf – each book so far has been a veritable bestiary of strange and unusual beasties. Which kinda makes up for the issues that detract.

Though Daniells' writing is less than perfect, I remain nonetheless invested in this trilogy because I'm suffering from the keen need to find out what happens in the end. And I suppose that's at the heart of every good story when it hits the mark with a reader.
Posted by nerinedorman at 1:03 PM