What is 'Prime Evil'? 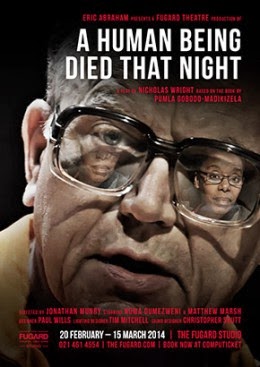 DURING Eugene de Kock’s trial in the 1990s, the media left us in little doubt that he was a cold-blooded killer who epitomised evil. He was given the name “Prime Evil” and became the poster boy for everything that was deplorable about the apartheid regime and the horrors perpetrated during that time.

Pumla Gobodo-Madikizela, a psychologist, was serving on the Truth and Reconciliation Commission when she first encountered De Kock, who had agreed to testify at a hearing into the deaths of two black policemen. He had been responsible for a limpet mine that had blown up their vehicle.
De Kock had requested a private meeting with the policemen’s widows, which at the time made a huge impression on Gobodo-Madikizela, so much so that she applied for one-on-one interviews with De Kock afterwards.
She wanted to gain a better understanding of this so-called monster and what had motivated him to apologise to the two women.

A Human Being Died That Night, written by Nicholas Wright, is based on the book subsequently published by Gobodo-Madikizela and explores the nature of evil, repentance and forgiveness.
The play centres on the dialogue between Gobodo-Madikizela and De Kock in prison, framed by moments where Gobodo-Madikizela steps aside to address the audience, as if she were a lecturer.
Upon learning of the play’s structure, my concern was how Wright would succeed in creating dramatic tension with such a static structure.

Our attentions are tightly focused on the two people facing each other across the table. The set is minimalist and there is little movement.

Yet I found myself entranced from the beginning, with an almost voyeuristic view of events, with Noma Dumezweni, in the role of Gobodo-Madikizela, facing off with Matthew Marsh as De Kock. The only other character is the silent Gantane Kusch, cast in the role of the prison guard. When the curtain lifted, I was eerily reminded of a scene from The Silence of the Lambs when Clarice Starling meets the notorious Hannibal Lecter for the first time, which I suspected was intentional (an impression that was later confirmed).

Very soon I forgot I was watching a play and was taken on a journey of remembrance.
I found myself disarmed by De Kock the moment he opened his mouth, and felt disconcerted by how my preconceived ideas of the man were being subverted. His self-deprecating humour even had me laughing at times.

We discovered quite soon that, when it comes to the man known as Prime Evil, nothing is as cut and dried as we are led to believe. If he is guilty, then what of the others who are still walking free?

The picture painted by Gobodo-Madikizela portrays a complex, sensitive man who, though fully cognisant of his own culpability, feels genuine remorse for his actions.

In this sense, he is a tragic figure who is as much a victim of the apartheid regime as those whom he tortured and killed. Yet there is no excuse for his actions. He has blood on his hands that will never wash off. He was a crusader for a cruel regime bloated with fear and needless hatred. Yet he is also a man capable of change, who has learnt that the dehumanised “targets” he was tasked to murder were people, just like him.

This is an important play, especially now that we have gained distance from those events that shaped South Africa. We need to remember – and in the act of remembering, ensure we move on from where we came without repeating the atrocities of the past.

If there is one play you see this year – or even if this is the first in ages – make the effort to see A Human Being Died That Night. You will walk away with many topics for discussion and a better understanding of the complexities of our country’s past.

As always, The Fugard Theatre impresses with the quality of the production, and the cast and crew deserve the standing ovation they received.

A Human Being Died That Night runs at The Fugard Theatre until March 15, and will then run at The Market Theatre in Joburg from March 19 to April 6. It will then head to the UK where it will run at The Hampstead Theatre in London from May 21 to June 21. For further information, see www.thefugard.com or call 021 461 4554.
Posted by nerinedorman at 1:04 PM