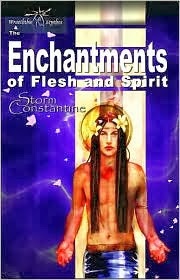 Possibly one of my biggest sins so far is the fact that I keep meaning to read all Storm Constantine’s Wraeththu Mythos stories but don’t ever quite get round to doing so. So, this is on my “to do” list for 2014. After all, Storm is one of my top favourite authors of all time.

I first encountered her novel, Calenture, and also a number of others way back when I was in my teens. I don’t know quite what it was that drew me to her writing – quite a number of things, actually. Her subject matter always hints at the unfolding of some greater mystery and is filled with references to esoteric subject matter, which is grist for my mill.

Not just that, but you get the idea that events are set up against a greater backdrop of epic proportions. There is an underlying current of eroticism without being explicit. I like that – sexual gratification is often implied rather that gratuitously depicted, which is refreshing in this day and age.

Settings and descriptions are lush. Storm takes her time to place you in her world and, as you read it, it is easy to build up a very vivid image of place and characters in one’s head.

The Wraeththu Mythos has, from what I can see, a small but devoted cult following among Storm’s fans. The world itself has also been expanded by the release of anthologies of stories written by fans of the milieu, not to mention fan art to be found on sites like deviantart.com.

The premise is simple – mankind’s successor, the hermaphrodite Wraeththu, has come into being, and mankind as a species is on the wane. Naturally this shift in the balance of power does not come without a price, and the world we discover is in turmoil.

But instead of putting up a united front, the Wraeththu themselves are in conflict with each other and seemed doomed to repeat the same mistakes as humanity before them.

Wraeththu come across essentially human – like viewing a woman superimposed over a young man. They do not appear to age visibly, and many of them develop magical abilities. They are a young race, and their abilities have yet to be fully explored, so there’s not telling what sorts of powers or abilities will crop up.

It’s clear why Storm begins her story where she does – essentially a coming-of-age tale for one Pellaz, who has spent his formative years as a peasant cable farmer (as for what cable plants truly are, Storm doesn’t tell us – and that’s fine by me. The name and uses suggest a singularly utilitarian crop that is about as inspiring as baked beans. Kinda like young Luke Skywalker working on his uncle’s moisture farm on Tatooine.)

Which makes Pell’s elopement with the mysterious Wraeththu Cal all the more delicious and forbidden. They head off to a settlement known only as Saltrock, which is run by a Wraeththu named Seel – who has envisioned a Wraeththu community where all can live in productive harmony in their self-made Utopia.

We discover the Wraeththu culture through the eyes of Pell the outsider, who like us is unaware of all the subtle undercurrents – and in that way we know only as much as he himself discovers. The first part of this novel is pretty much just a travelogue of Pell and Cal going forth and adventuring, and some fascinating folks along the way.

Then, of course, everything changes. I won’t say what, but there’s enough of a foreshadowing at Pell’s inception for you to figure out that there are larger plans afoot, whether Pell likes it or not.

All I can add is that this mythos will not have broad appeal, especially in this day and age where authors are encouraged to start their stories off with a big bang and lots of trauma. Of course I love the Wraeththu Mythos, for all its intensity and wild beauty and the textured, slow-moving prose. Storm concerns herself with creating moods and weaving a rich tapestry that constructs her rich mythology. Emphasis is placed on complex relationships and vivid world-building.

The story is ripe with detail, and I was surprised by how much of it felt new even with the second read-through of this novel. Mainly, this story is one of those feel-good, self-indulgent tales for me that I can truly immerse myself in the setting – a not-so-guilty pleasure. The Wraeththu themselves are fascinating, enigmatic beings, and if you’re looking for a supernatural creature that is a magical departure from the bog-standard fare of fairies, angels or vampires, then you really cannot go wrong with the Wraeththu Mythos.

Posted by nerinedorman at 10:39 AM